For Anastasia Wagner, a Schreyer Scholar who hails from Pittsburgh and is just one semester shy of a degree in political science, politics is more than a major. It’s a personal passion.

Over the course of her Penn State career, Wagner has gained a range of experiences in politics that will serve her well as she aspires to eventually hold elected office herself. She credits her success in part to the Spark Program, offered through Undergraduate Research and Fellowships Mentoring (URFM), which she participated in during the spring of her freshman year.

The Spark Program, Wagner explained, helped her understand how to leverage University resources in pursuit of fellowships and internships and to present herself well in written application materials. She has since deployed these skills to land several prestigious positions in her field.

As a fellow with the Pennsylvania Democrats Coordinated Campaign in State College, Wagner campaigned for local Democratic candidates leading up to the 2018 midterm elections. The experience began with her knocking on doors and calling voters, and by the end of her tenure Wagner was recruiting and training volunteers and single-handedly coordinating the organization’s phone banking and canvassing efforts. The experience, her first in politics, affirmed her interest in the field.

“Political campaign work can be really difficult and complicated, but I found it quite fun,” said Wagner. “Once you get over the discomfort of having to ask people to donate their time and energy or to vote a certain way, you realize that there are so many wonderful people in State College who want to make a difference in our community.”

With this initial experience under her belt — and with guidance from URFM — Wagner landed a highly competitive position the next summer as a public policy intern with the Pennsylvania State Senate Democratic Appropriations Committee. Stationed in the office of Democratic Senator Vincent Hughes, Wagner held responsibilities that ranged from conducting legislative issue research, to meeting with constituent and special interest groups, to helping write legislation and amendments.

“This experience was a phenomenal opportunity to learn by doing how legislators operate,” she said. “I was honored that Senator Hughes and his staff entrusted me with such meaningful, substantive work.”

Wagner held her most recent position this past spring as a fellow with NextGen America, a nonpartisan organization committed to turning out the youth vote. Through this paid experience, Wagner further developed her campaigning skills as she motivated her fellow students to vote, regardless of their political affiliation. Then, when the COVID-19 pandemic forced Americans into their homes, she helped the organization transition entirely to a digital engagement strategy.

Wagner hopes to continue her work in politics as a field organizer with the Pennsylvania Democrats Coordinating Campaign. She ultimately aspires to building a career in legislation, first as a legislative staffer and then, hopefully, as an elected official herself.

“Pennsylvania has never had a female governor, so the possibility of becoming the first is very exciting,” said Wagner. “Even being president is not off the table. I have so much time!”

In addition to her involvement in the Spark Program, Wagner is an officer in Pi Sigma Alpha: The National Political Science Honors Society, a member of the Penn State College Democrats, and a Paterno Fellow. 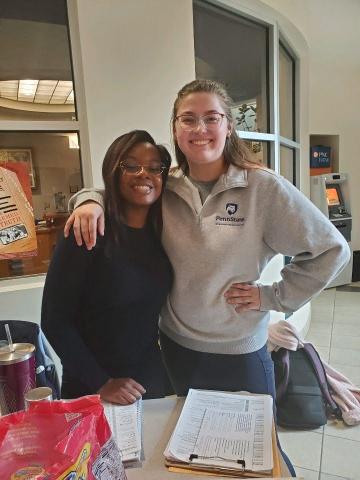