Tim Benally, a junior majoring in psychology at Penn State, was awarded a Udall Undergraduate Scholarship in May 2020. Benally received support from Undergraduate Research and Fellowships Mentoring (URFM) throughout the application process.

Benally, of Ganado (Navajo Nation), Arizona, was recognized by the Udall Foundation for his demonstrated commitment to improving health care for Native Americans living in the Navajo reservation.

After receiving the news that he earned the scholarship, Benally said he was feeling “overwhelmingly blessed and grateful to God for leading me in the directions He has led me over the past three years. I also think an ignited sense of purpose now that I am starting to see my hard work is finally starting to pay off, not only for me but for the people I will help in the years to come.”

Benally explained that coming to Penn State was a personal financial risk, with more affordable options closer to home. His journey has included numerous part-time jobs — many on campus — and spending a large amount of time writing for scholarships and grants.

In addition to the financial risk, Benally said attending a college in the eastern U.S. meant often being the only Native American in classes, organizations, and nearly everywhere he went. He said he often found himself advocating and educating on behalf of Native Americans and had a turbulent start to college.

“I now realize those initial times were tough,” he said. “That is what it took to now be the first Native American to win the Udall Scholarship at Penn State and to blaze the trail for more of my people to succeed.”

Over time Benally became more engaged on campus and spearheaded initiatives to recruit more Native American students to the University, culminating in the creation of the Indigenous Peoples Student Association, which first met in January 2020. He has also begun work on a University Land Acknowledgment, which is a formal statement that recognizes Indigenous Peoples as the original stewards of the land and pays respect to the relationship with their original territories.

His plans for the future include pursuing a doctorate in clinical psychology and returning to the Navajo reservation in order to implement culturally sensitive mental health research and interventions, he said.

“Studying psychology already holds extra incentive for me with my Christian faith and the Navajo teachings of Hózhó (reverence for the beauty in everything on earth), which have taught me the value of human connectedness, spreading hope, and finding meaning in life,” Benally said.

Through his undergraduate research, Benally already has an impressive record of scholarship. His work has evaluated participants’ choices in whether they engaged in empathy with Native Americans portrayed in a suffering context, which Benally said was a continuation of ongoing studies of empathy, culture, and compassion being conducted in the clinical area of the Department of Psychology.

He said he “hoped to understand further how modern Native American disparities and past atrocities are regarded in mainstream society so that I could better understand how to advocate for myself and my people. More specifically, the psychological abnormalities that root to historical trauma that continue to affect many Indigenous populations today.”

“As a McNair Scholar, I was fortunate enough to have the autonomy to redesign and implement an experimental study on empathy avoidance with my mentor, Dr. Jose Soto,” Benally said.

“The bulk of our research took place over a ten-week internship during the summer of 2019 and resulted in my first research publication in the McNair Journal. I will be conducting a follow-up project in the summer of 2020 that will evaluate in-group empathy avoidance using the same experimental design. Overall, my research is oriented toward the healing of Indigenous peoples throughout America and demonstrates the Navajo term, T’ahdii kǫ́ǫ́ honiidlǫ́, ‘We are still here.’”

Benally is the first Udall Scholarship recipient from Penn State since 2016 and also the University’s first awardee from the health care category.

In applying for the Udall Scholarship, Benally sought and received support from URFM.

“URFM was extremely helpful in providing me guidance from the start,” he said. “I really appreciated how Dr. Ting listened to my experiences and helped me connect those experiences to the scholarship criteria. It was beyond a positive experience and has since given me great direction and connected me to people who share my passion for life.”

In addition to earning the Udall Scholarship, Benally was also recognized by the United National Indian Tribal Youth (UNITY) as a top-twenty-five Native Youth Leader and earned a leadership award from the Council of Multicultural Leadership at Penn State. He also made the Dean’s List for the fourth semester in a row.

About the Udall Undergraduate Scholarship

Those who earn a Udall Scholarship are provided with up to $7,000 for eligible academic expenses. Awardees are also invited to spend five days in Tucson, Arizona, at Scholar Orientation and have access to the Udall Alumni Network.

The scholarship is open to those who are Native American or Alaska Natives working on tribal policy issues or pursuing health-related careers, or for any undergraduate interested in conservation and environmental issues. To be considered, applicants must be a sophomore or a junior in college and a U.S. citizen or U.S. permanent resident.

Those interested in competing for a Udall Scholarship should contact URFM to learn more about the scholarship program. 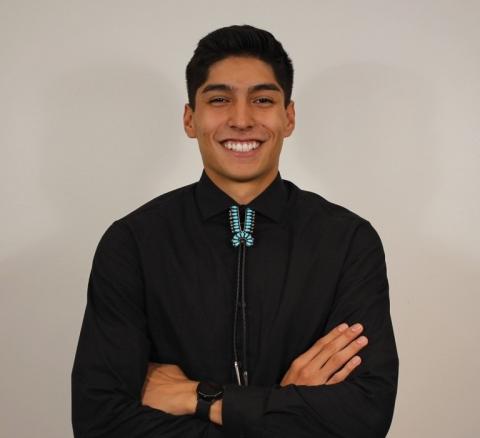